Scientific studies show UV light can kill 90% of microbes within 10 minutes. After 24hrs 99.9% are killed.

Much of the research on the health benefits of UVGI has been performed in health care settings such as hospitals, including tuberculosis wards in hospitals. UVC light has been used in hospitals since 1936 to kill airborne contagions.  Other study sites have included barracks, schools, offices, and homes.

Ultraviolet (UV) germicidal lights produce short wavelength light (or radiation) that can damage the genetic material in the nucleus of cells of microorganisms such as bacteria, viruses, and molds. The cells may be killed or made unable to reproduce. With extended exposure, UV germicidal irradiation (UVGI) can also break down the particles that have deposited on an irradiated surface. 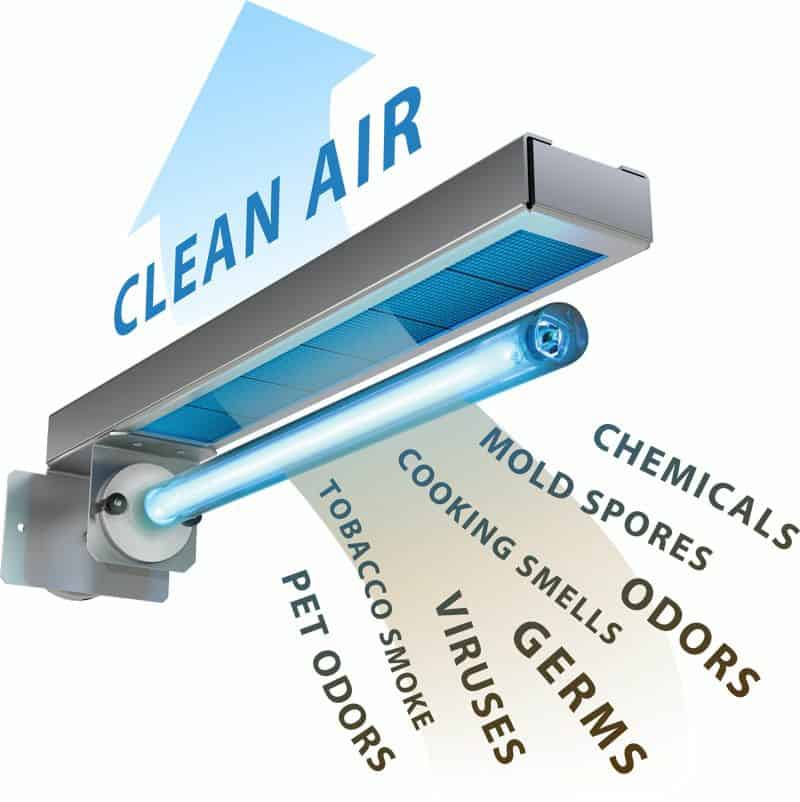 When it comes to keeping your home cool without putting excess strain on your air conditioning system, airflow is one of the most important factors.

As time goes on, debris builds up within your system, and although the air filter works to trap some of these particles, it can only do so much.

Adding a UV light can give your system a serious boost, ensuring optimal airflow.

Aside from debris, airflow is also hindered by accumulated microorganisms on the HVAC coil. Often, to remedy this, you might be required to run the system for an extended period to achieve the desired temperatures.

UV lights on your coil help destroy the microorganisms that inhibit smooth airflow.

You may need to clean your coils to allow efficiency in the destruction of the microorganisms to enhance smooth airflow. The cleaning also helps in the reduction of power consumption by HVAC unit.

When your air conditioning system works efficiently, it requires less energy to operate.

Couple this with a humid climate and you have a recipe for mold and bacteria. This is where the magic of UV light technology truly shines.

UV light significantly reduces microbes on the coils within your system.

The microbes are halted before they can ever become airborne, reducing the risk of mold and other bacteria from infiltrating the rooms in your home.

As mold and bacteria become problems of yesteryear, you immediately benefit from improved indoor air quality that contains less allergens.

Considering the average person spends the majority of their life inside their home, this a huge win.

An added bonus? Allergy sufferers will finally get some relief.

Are you ready for cleaner air
in your home?